No Limits on the Horizon for U2

So, U2’s dropping a new album Tuesday (download it from Amazon for only $3.99!) and I’m excited, having been a fan since 1980. But when it came to doing a review, I knew the best person for the job would be my contributing writer, Debbie DeNice, the resident U2 expert. I’m telling you—she’s got a Master’s degree in Bonology and has traveled the world to see them live (from the pit, baby). She turned in the following review plus exclusive photos she took herself. Enjoy! 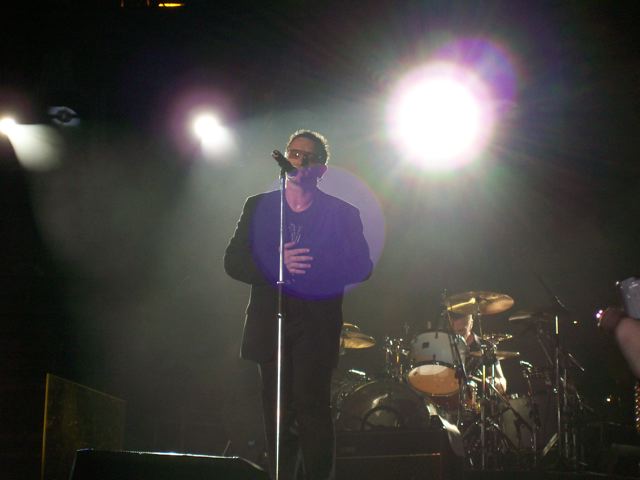 Uno. Dos. Tres. Cinco. Cinco? Yes, cinco. That’s how many years have passed since U2’s last studio album, How to Dismantle an Atomic Bomb. This Tuesday, U2 will release No Line on the Horizon and Club Vertigo, with the boys who play rock and roll and the girls with crimson nails, has been left behind. We’ve walked out in sexy boots because the future needs a big kiss—along with some love and community.

They began work on NLOTH with Rick Rubin, a producer known for his “stripped-down” sound, creating naked vocals and bare instrumentation. For whatever reason, their teaming with Rubin ended (two songs completed with Rubin, the cover of the Skids’ “The Saints Are Coming” with Green Day and “Window in the  Skies,” were released on U2’s 18 Singles compilation album in 2006) and they reunited with Brian Eno, Daniel Lanois and Steve Lillywhite. Out went the back-to-basics rock ‘n’ roll of Atomic Bomb and in came the experimental, sonically textured NLOTH. And it works. It rocks.

The standout tracks for me: “Magnificent,” “Moment of Surrender,” and “White as Snow.” Each of these songs begins pared down, stripped bare with only an instrument or a vocal. A sonic focal point on the water that slowly amplifies by layering tones, vocals, and instruments, sending rippling sound waves out onto the horizon.

The range of sounds and the texture of tones that NLOTH brings are unexpected and welcomed—‘70s rock, folk music flavor, and a touch of otherworldliness. The sound of a droning organ and a fat, fuzzy, or distorted guitar prove that when it comes to rock musicians, the Edge is in rarefied air. Bono is in brilliant voice and writing some beautiful lyrics that touch on themes of love, war, transcendence and being Bono. While Bono and the Edge get most of the attention, the rhythm section consisting of Adam Clayton and Larry Mullen, Jr. kick ass. Funky bass grooves and staccato drumming add to the richness of this aural pleasure that is NLOTH.

This is a transitional album for U2, in the same vein as The Unforgettable Fire and Zooropa. As such, it may take awhile to be fully appreciated but U2 is back. Back with big sounds, big ideas and a big voice, though some may argue—a big mouth. As I heard Bono say recently, “U2 are not going anywhere anytime soon.”

Tour information goes up on their website (U2.com) next Monday, March 9th. Rumor has it they may have some recession-priced tickets so check them out this summer in a city near you. I, for one, can’t wait to meet them in the sound!

All You Need Is IDOL: Season 9 Top 9 Review