CD Review: Kelly Clarkson’s ALL I EVER WANTED 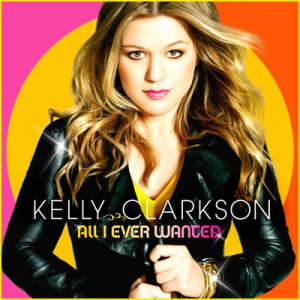 One of my pet peeves is driving along next to someone who’s got their stereo cranked up so loud, I can feel the sound vibrations thumping through my chest wall, jacking my heart into a near-attack. I mean, does anyone need to listen to music that loudly? Well, yes, if it’s Kelly Clarkson’s new CD. Listening to All I Ever Wanted (dropping March 10), I just wanted to open the sunroof, turn the stereo up to 11 and go roaring down the freeway, pumping my fists in the air and hollering, “Hell, yeah, she’s back, baby!”

I’m not going to rehash all that business about her feud with Clive Davis over the direction of her last album, My December. All you need to know is that this one is chock full of catchy hard pop songs that you’d need a lobotomy to get out of your head, even after one listen. Kelly’s having fun here and it’s evident throughout, starting with that cover art, which sets the tone for the collection—it’s bright and bursting with color.

My favorite cuts: “I Do Not Hook Up,” the ridiculously catchy anthem for abstinence, co-written by Katy Perry and Kara DioGuardi, that manages to be both tough and sweet; the funky title track with the thumping beat, R & B feel and searing chorus; “Long Shot,” a staccato-rhythmed cut also co-written by Perry, and the be-boppy, ’60s girl-groupy “I Want You,” where Clarkson is all bouncy bubble gum and not the least bit moody or angsty. It’s a different sound for her but it’s fun and it works.

There are a couple of pretty ballads, too. “Cry” is reminiscent of “Breakaway” and “Already Gone” slightly echoes Sinead O’Connor’s “Nothing Compares 2 U.” Less talented singers sometimes bore me when they slow things down because they end up revealing the shallowness of their vocals. Clarkson has no such trouble. Slowed down, funked up, stretched out, whatever—her blazing voice can do pretty much whatever she wants it to.

Lyrics-wise, there’s nothing groundbreaking here. Most of the songs deal with relationships—pining for a guy or trying to get over a guy. But hey, Clarkson’s not going for songwriter of the year (she co-wrote some of the songs). What she proves with this album is that she can enjoy herself while still giving the public what it wants.

Nerd verdict: All you want in a Kelly Clarkson album