You’d think that on Top iTunes Downloads night, the nine remaining contestants wouldn’t have any trouble picking some great songs, considering the vast number of choices available. But there were very few high notes tonight, with only Danny Gokey, Allison Iraheta and Kris Allen turning in dynamic performances.

Anoop went first and I was happy to hear he would funk it up again with Usher’s “Caught Up” after singing ballads (very well) two weeks in a row. But, man, it was weak. The song overpowered him and it looked like he was trying to just keep up with it.

Megan chose a Bob Marley/Lauren Hill song, “Turn Your Lights Down Low,” and I thought, Wow, she’s ambitious tonight! Unfortunately, her risk-taking didn’t pay off. I’ve been fighting for this girl to stay because she’s so unique but this performance was disastrous. For the first time, I thought maybe it’s time she goes home.

And then Danny came along and kicked the show into gear. When he said he was singing the Rascal Flatts’ “What Hurts the Most,” I groaned since I don’t like country music. But he came out, gave a beautifully heartfelt performance that was his best since “Kiss from a Rose” during Hollywood week. He reminded me why he should be a front-runner, something I’ve lost sight of in recent weeks.

Allison tackled No Doubt’s “Don’t Speak” this week and played guitar, which I didn’t know she could do. This girl just gets more awesome each week, despite her misguided wardrobe choices. She sings and performs like a 40-year-old woman and I mean that in the best way. There is nothing tentative or insecure about her when she’s on stage.

Scott got himself a makeover, looking much more masculine in black leather than last week’s pink pants. Musically, however, he was less compelling than the piano player at my local Nordstrom’s. He sang “Just the Way You Are” but sounded more Barry Manilow than Billy Joel.

Matt was another singer who stumbled. He tried to be all sexy and tough, also in black leather, but his rendition of the Fray’s “You Found Me” was wonky and  unimpressive. It sounded like he was trying too hard. The first few notes were too low for him; he lives best in his falsetto. He was on fire last week so it’s frustrating how inconsistent he is.

Lil put on yet another wig (love how her look completely changes from week to week) to sing Celine Dion’s “I Surrender.” Oy. I’m no fan of Dion’s music but that woman does have an incredible voice and Lil never came close to what Dion can do with that song. Paula said it best when she said she didn’t want to see an Adult Contemporary Lil. Me neither. Funk it up, girl!

Adam went back to his screeching, flamboyant persona with an over-the-top version of Wild Cherry’s “Play That Funky Music,” one of my favorite party songs. I can never hear that song and not start shaking my booty. But Adam’s rendition scared me so much I probably won’t be requesting it from the DJ any time soon. My ears are still ringing three hours later from the screaming he passed off as singing. I will say, though, that as soon as he finished the song, he turned into a completely humble guy, giving due credit to Ricky Minor and the band. It’s as if he has dual identities like Beyonce and Sasha Fierce.

The headliner spot went to Kris Allen and he stepped up! I’ve never thought of him as a front-runner but tonight was a small revelation. He went with Bill Withers’s “Ain’t No Sunshine,” one of my faves ever, and made it sound fresh. This kid is definitely growing on me. His performance was both tender and powerful and I didn’t know he could play piano so it was smart of him to change things up.

Bottom three? Scott, Megan and Matt are my guesses. Agree? 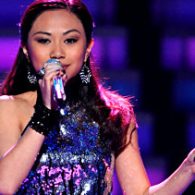 BETTER OFF TED Better Than Some Sitcoms