There were very few standouts for me but I can’t do a recap without covering the fashion, right? Here are some of the best and worst.

Sigourney Weaver. How magnificent does she look? When I grow up, I want to be this classy.

Olivia Wilde. Not many people can pull this off. It’s a risky, sexy look but still appropriate for a prime-time awards show. And it fits her like a second skin.

January Jones. There’s nothing retro about this gown. I love its futuristic, architectural design.

Most Convincing Argument that She’s a Grown-Up:

Blake Lively. She made it very clear she’s not a girl but a smokin’ hot Woman.

Lively’s Gossip Girl co-star, Leighton Meester. She looked tired, greasy and messy and I didn’t know why she carried two baby bunnies around on her shoulders all night.

Hayden Panettiere. Her face hasn’t lost all its baby fat but for some reason, she thinks she’s 50 years old. That hairdo and dress would look too old on Helen Mirren. 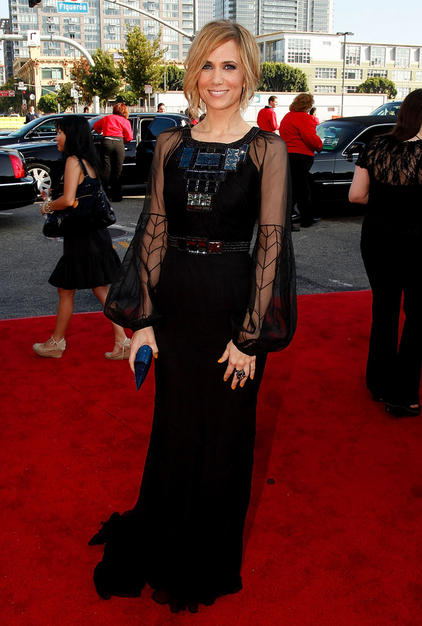 Kristen Wiig. I LOVE her but this looks like she couldn’t decide if she wanted to be Darth Vader or Spider-Man.

Which dresses were your favorites? Anybody frightened you with their fashion choices?