SCRUBS and Other Returning TV Shows

Anyone watch Scrubs last night? I thought the two episodes were pretty good. I loved this show’s first two seasons but it became really uneven over the years, to the point where I almost stopped watching last year. But last night, the show made me laugh again with the addition of some fresh blood.

Courteney Cox was very funny as the new chief of medicine, Dr. Maddox. The best part for me was her firing the janitor. That character is so annoying—he’s NEVER made me laugh, not once. I know we haven’t seen the last of him but at least he didn’t show up for the second episode and for that I was grateful. What I didn’t like was how Dr. Maddox turned out to be a jerk, like Dr. Cox feared. Cox (Courteney) was so winning I wanted her to stick around for a while but I don’t want such an insurance whore to be in charge of Sacred Heart.

The best thing for me about these episodes was the clear evidence that Bill Lawrence or someone on staff is a Flight of the Conchords fan. Both episodes featured the hilarious work of Aziz Ansari and Eliza Coupe (as J.D.’s new interns Ed and Denise), both of whom were standout guest stars on Conchords, the funniest sitcom around next to 30 Rock. The Conchords connection alone makes me want to tune in for the rest of Scrubs‘s likely final season, just in case Bret and Jermaine show up, too. 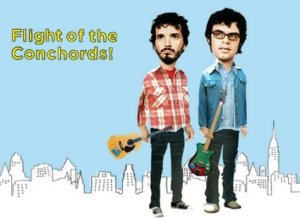 Speaking of Bret and Jermaine, any other Conchords fans here? I’ve been promoting this show since it premiered in summer of ’07 because I think it’s comic brilliance. The second season starts Jan. 18 on HBO. You can watch the full Season 2 premiere episode here but it’s not one of their strongest (though still funny) so you really must rent the first season DVDs to get the full impact of these guys’ humor.

For a taste, check out the the following video. It’s Business Time, baby.

What returning shows are you looking forward most to seeing again?

Behind the Scenes Preview of the Golden Globes