WE ARE ONE: THE OBAMA INAUGURAL CELEBRATION – My Reactions

I grew up in the D.C. area. Every time I went into the city as a kid, I couldn’t understand why tourists would freak out when they saw the Washington Monument or the Lincoln Memorial. I’d roll my eyes as I watched them furiously snap away with their cameras and think, “What is the big deal?! One’s a boring tower and the other is Lincoln sitting in a chair.” 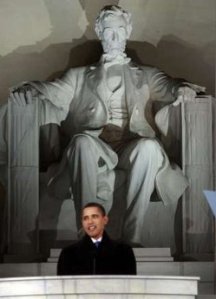 Ah, what a foolish child I was. I totally took these things for granted because they were in my backyard and I could see them any time I wanted. Yesterday, watching the inaugural celebration on HBO from my living room in California, I fully appreciated the power and majestic presence of these landmarks and wished I was there. Though the skies were cloudy and the temperature frigid, the structures served as gleaming backdrops for the readings and songs presented by an all-star lineup.

Of course, there were a few cheesy moments as well. When Tom Hanks read a portrait of President Abraham Lincoln, the brass band accompanying him was borderline obnoxious with its percussion accents and being so loud at times it seemed Hanks had to shout to be heard. And then there’s Garth Brooks. How come of all the stellar performers there, he was the one who got to sing three songs?

Overall, though, the show was uplifting and ran quite smoothly considering the logistics involved. Let’s hope the same can be said about Obama’s administration.

What were your favorite moments? Who did you think were the best performers and who had no business being there?

They Said What?! Stars’ Quotes Not Televised During 2009 Golden Globes Ceremony

Your Obsessions This Week--Open Discussion