Since my TBR book pile was getting so big it threatened to become a fire hazard, I decided to lock myself in until I’d made a dent in it. Well, that didn’t last long since I ended up going to the beach, eating pizza, surfing the Internet, and watching an old episode of Family Feud where Richard Dawson said “name a beverage that comes in a can” and someone said “wine” then his brother said “milk.”

But I did manage to finish four books and here’s a rundown: 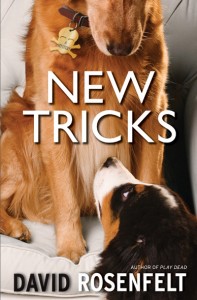 This is the seventh in the Andy Carpenter legal thriller series and if you aren’t reading these books already, please check them out pronto. If you don’t like them, you can come to my house and sic attack dogs on me. I can say this without fear (and making secret plans to move) because I think you’ll enjoy Rosenfelt’s ability to combine laugh-out-loud humor with deadly plots.

Carpenter is a wealthy defense attorney who only takes on cases he’s passionate about and since he’s a dog lover, sometimes his clients have four legs. This time, he’s got two clients—one dog, one human. He represents Waggy (the dog) after Waggy’s owner, a DNA expert, is murdered and his wife and son fight for custody of the puppy. When the owner’s wife is also killed and his son is charged with both murders, Carpenter decides to represent him, too.

Carpenter discovers the murdered scientist had been working on some scary, world-changing stuff and the investigation causes harm to seemingly everyone Carpenter comes across, including someone close to him. Rosenfelt manages to inject humor into Carpenter’s darkest hours without making it seem inappropriate. He never loses sight of the lawyer’s heart when it comes to relationships with his girlfriend, Laurie; his investigative team and his beloved golden retriever, Tara (she’s cool, not cutesy). Waggy is a winning addition to this eclectic bunch and I hope he’ll wreak more havoc in future installments. Nerd verdict: Funny but deadly Tricks. 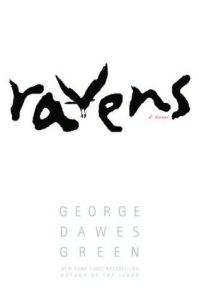 A couple of grifters named Shaw and Romeo are driving to Florida when they stop at a convenience store in Brunswick, Georgia and find out a local family, the Boatwrights, had just won $318 million in the lottery. Shaw hatches a plan to take them hostage and make them give half their winnings to him and Romeo. Things don’t work out the way anyone planned.

I had mixed feelings about this book. Green’s prose is deft and witty and his characters are well-defined. The situation is ripe with potential for suspense. Problem is, I couldn’t find anyone to really root for. We get glimpses of decency in Shaw and Romeo but ultimately, they’re delusional and sad. The Boatwrights are not very sympathetic, either. The dad is cowardly, the mom is a vapid drunk and the son is a video game addict whose big mouth got everyone in trouble in the first place. Only the daughter, Tara, shows any spunk but mostly, the family just accepts the hostage situation with no real plan to outsmart the bad guys. There’s a lot of sitting and driving around without much happening. This might be realistic (I wouldn’t fight a crazed gunman in my house, either) but it impedes the narrative’s forward movement.

This book is more a psychological study and a be-careful-what-you-wish-for warning. It’s almost as if the characters are slapped down for dreaming too big. Or maybe Green is saying it’s okay to aim high, just don’t plan on getting there overnight. After all, it did take him fourteen years to produce this novel. Nerd verdict: Ravens doesn’t quite take flight. 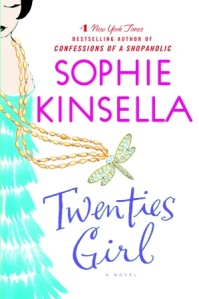 To lighten things up after a couple thrillers, I reached for Kinsella’s latest. She’s pretty reliable for making me chuckle with her Shopaholic series so even though I’m not big on ghost stories, I didn’t let that stop me here. The story revolves around Lara, a modern girl struggling to run her own company after her business partner deserts her. She’s also desperate to get back together with her “perfect” boyfriend who recently dumped her without explanation.

Into her life comes Sadie, the spirit of her great aunt who recently died at 105 but whose apparition appears to be in her twenties. Before she can move on, Sadie demands that Lara help her find a missing necklace that she’d owned almost all her life. Lara reluctantly agrees, if only to get rid of the pesky ghost. Along the way, Sadie teaches her a thing or two about passion, dignity and living life on your own terms.

Though the plot gets a little too incredulous at times, the book is fun, escapist fare. Sadie starts out shrill but she quickly grows on you. As her past is revealed, we realize her life was more substantial than it seemed at first. The bond she eventually forms with Lara is surprisingly poignant and my eyes got a little moist in the end, something I never expected to happen with a Kinsella novel.

I have to be nitpicky and mention something which made me cringe, though it’s not Kinsella’s doing. Referring to Sadie’s lack of concern for Lara’s problems, the following sentence appears on the dust jacket: “Sadie, however, could care less.” Arghh! I know it’s hard to catch every typo and grammatical error buried within a book’s hundreds of pages, but this is on the jacket right inside the front cover. And it’s copied verbatim on Amazon! Please, someone, change it to “couldn’t care less” for the next printing. Nerd verdict: Girl has some substance. 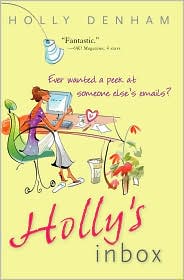 I kind of cheated when I picked up this book because I knew it would be a fast read. I also knew that once I removed the 665-page tome from the pile, I’d be able to see my windows again.

The story is crafted entirely out of e-mails, 99.5% of which are from Holly’s inbox (towards the end, we get to read a few from a couple of her co-workers). She’s the new receptionist at a London bank, starting over after some implied recent trouble. Though this view into Holly’s world is limited, she comes across as multidimensional: loving towards her family though they frustrate her, protective of her co-receptionist though the woman is obviously hiding something, patient with her promiscuous friend, and flirtatious with an exec in the company. She’s also been devastated by someone/something in her past and trying really hard to prevent it from happening again.

Though I’m not a snoop—you could leave your diary open on your front stoop and I wouldn’t read it out of fear you’ve got some weird fetish I don’t want to know about—I found scrolling through Holly’s e-mails addictive. The pages fly by when there’s not a lot of exposition but this is still a well-rounded story with fleshed-out characters. Holly’s combination of strength, vulnerability and sense of humor make her a charming lead and Denham’s writing is cheeky and breezy. Wait, make that Bill Surie‘s writing because the author is actually a man using a pseudonym! I’d have to go back to Arthur Golden and Memoirs of a Geisha to come up with another male who wrote from a female POV so convincingly. (No, he’s not gay; read his NY Post interview here.) Luckily, Surie says he’ll continue to write as a woman and Holly is expected back in a sequel. Nerd verdict: Check out Inbox‘s contents.