If you’re a regular reader here, you know I’m a devoted fan of Audrey Niffenegger’s novel, The Time Traveler’s Wife, and that I’m excited about the movie adaptation finally opening this Friday, August 14. (Click here to read an assessment after a test screening.)

Eric Bana and Rachel McAdams, who star as Henry and Clare, have been getting lots of press so I thought I’d talk to a pair of different actors from the movie, Hailey and Tatum McCann, sisters who play Henry and Clare’s daughter Alba at different ages (Hailey: 9 & 10, Tatum: 4 & 5).

Though they were traveling to attend the movie’s New York City premiere tonight, the girls agreed to an e-mail conversation and come across grounded and smart, like normal kids who just happen to be in a grown-up business.

For more info on Hailey and Tatum and how they got their start in acting, click on their names to visit their websites. Meanwhile, read on as they answer my nerdy questions about their TTTW experiences.

PCN: Stories about time travel can be confusing, even for adults. How did you manage to make sense of the story? Did you read the book first?

Hailey: No, I didn’t read the book first because I heard that it was too mature for my age at the time, but I didn’t find it confusing at all! When you break it down scene by scene, it’s a lot easier to understand. The only part that was confusing was when we couldn’t figure out which Alba was in what scene because we were both referred to as “Young Alba”!! 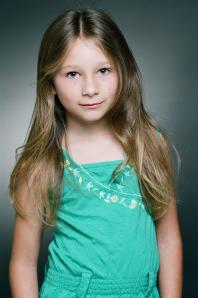 Tatum: No, I did not read the book because it was too grown-up. I heard that they kissed and stuff…eeeww! It wasn’t really confusing because we do it one scene at a time over and over and over again—until we had lunch…yum yum.

Hailey: We both decided that Tatum would go first and she read for Alba and [Young] Clare, then I would go next reading for Alba.

PCN: How many callbacks did you have before booking the job?  Did you have to screen test with either Rachel McAdams or Eric Bana?

Hailey: I had an audition and a callback and that was it. I never had a screen test with either of them.

PCN: That’s great. Sometimes actors have to audition 6-8 times for a big movie. What was it like working with Rachel and Eric?

Hailey: Both Rachel and Eric were truly amazing people to work with! Before we started shooting the film, the three of us took a trip to a museum to get to know each other. As we walked around, many people recognized Rachel. When they did, she graciously took pictures with them and was so loving and kind to everyone. A few months later, Eric and I were shooting in Chicago. It was unbelievably cold and very windy. Eric would huddle me in his oversized and fuzzy jacket to help keep me warm in between takes. Both Eric and Rachel are amazing actors and extraordinary people. 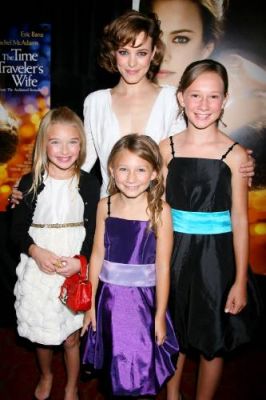 Clockwise from L.: Brooklynn Proulx (who plays Young Clare), McAdams (in back), Hailey and Tatum at the NYC premiere/Getty Images

Tatum:  Most of my work was with Rachel. In between takes, Rachel and I would exchange jokes. She was so nice listening to all of my jokes that didn’t make a lot of sense because I would tell them in segments or whenever we had time. Rachel is very funny and she knows tons of great jokes. After we finished shooting, she gave me a fabulous joke book that still entertains me today!

PCN: You kind of covered my next question. Since you had to do some heartbreaking scenes, I was wondering what you did between takes.

Hailey: Actually, I laughed and danced and talked and shouted!!! While the camera is rolling, I stay in character and am totally serious, but once they say “cut,” it’s all smiles from everybody on set.

Tatum: I would help Rachel start laughing to help her stop crying. Once you get so into a scene it’s hard to stop, but good jokes and smiles usually do the trick!

PCN: What were your favorite experiences on set?

Hailey: One of my favorite experiences was when Tatum and I got to film together. It was so much fun to film because we hadn’t seen each other for a while and we got to meet up and do what we both love to do…act! And we got to poke a dead bird with a stick, but the first reason is more important.

Tatum: I second the motion! Working with my sister was awesome, and I hope to do it again soon!

PCN: What are you working on now or have coming up?

Hailey: I recently filmed an episode of [the A&E TV series] The Cleaner and I have auditions in the works…fingers crossed.

Tatum: I shot an episode of ER and recently went out on a couple movie auditions…wish me luck!

PCN: Break a leg, both of you! Do you intend to keep acting into adulthood? When you hear stories about child stars like Lindsay Lohan and Mischa Barton misbehaving, how does it make you feel?

Hailey: As of now, I am 13 and loving acting, but we will see where acting takes me. And as far as people in the news, I wish they had better friends to keep them grounded and out of trouble!

Tatum: I want to continue acting and hope I will grow up to be as cool and pretty as some of the actresses I’ve worked with, like Rachel McAdams and my sister, Hailey. 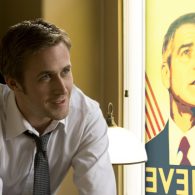 Movie Review: THE IDES OF MARCH