Nerd Chat with Robert Crais Plus Giveaway of THE FIRST RULE

Though he’s busy gearing up for the release of The First Rule next month (January 12), Robert Crais generously took time from shopping for loud socks to do an e-mail interview with me.

If you’re already a fan, you know the basics. If not, visit his website for all the dish, then check out his tour schedule.

I’m giving away some goodies, with details below the interview. But first, read on as we discuss Joe Pike, who’s center stage in The First Rule. The novel is a blood-pumping, rocket-paced adventure with all the usual Pike-isms, but it also reveals an unexpectedly tender side of him that makes your chest clench a little.

PCN: Since there’s a heartrending twist in TFR that I don’t want to spoil, I’ll just ask vague, possibly irrelevant questions. Hopefully, this will entice people even more to pick up the book to see what the hell I’m talking about.

Pike goes where we’ve never seen him go emotionally and it changes him. How will that affect his future actions?

Robert Crais: Maybe it won’t. Pike has been Pike for a long time, so he’s good at repressing his feelings.

PCN: Does he repress his, um, urges, too? I don’t recall any girlfriends since Karen Garcia in L.A. Requiem and even she was in flashbacks. When’s he gonna get some again?

PCN: I’d ruin him. He’d start knitting me sweaters and calling me “Pumpkin.” Who would want that? Could he remain an interesting character if he were in a happy relationship?

RC: I doubt it. Part of Pike’s appeal is his “other-ness.” He’s a strange cat and readers like those aspects of his character. If he were “normal,” I don’t think people would find him as interesting. Could Pike be in a happy relationship? I don’t know. He probably wants to be in a happy place, but I don’t think he knows how to get there.

PCN: I could draw him diagrams but I don’t really want him to go there. Now, some actors do Method Acting. Ever do Method Writing as Pike?

RC: That’s how I write. I put myself in his place, feel what he feels, share the moments with him. If I don’t feel what Pike feels, if I’m not there in the moment, the scene won’t work.

PCN: What does putting yourself in his place entail? Knocking heads, eating vegetables, then running at night with coyotes?

RC: Pike does those things to put himself in MY headspace.

PCN: When he’s not on a case with Elvis, at the gun shop, working out or cleaning his Jeep, what does Pike do? Pottery? Watch Glee?

RC: Decorative macramé. It’s all the rage. And Pike loves Glee. You going to make fun of him for that? Go ahead—I dare you.

PCN: Nah, I like him more for it, especially if he does the “Single Ladies” routine to warm up before a run. You excel in showing how Pike feels about people and things through his actions so I’m happy with the third-person perspective. Hypothetically, though, could you write him in first person?

RC: Of course. I am the World’s Greatest Writer.

PCN: What kind of book would that be?

RC: Short. He doesn’t say much.

PCN: In TFR, Elvis goes to eat at the Sidewalk Café in Venice. I’d bet he’s there to sample the Robert Crais pizza. Why does your namesake pie have way more meat than the Cormac McCarthy pizza?

RC: Have you eaten me yet? I’m pretty good.

PCN: I have, and thought you were cheesy and meaty. And cheap!

RC: You should tell your readers the Sidewalk Café in Venice is a real place. They named a pizza after me, so I like them a lot.  Also, they make a dynamite pie.

PCN: I see you’ll be signing at a Costco on tour. Which aisle is your favorite place to sit?

RC: Big screen TVs. There’s something to watch after the crowd thins.

PCN: Right, once you tell people where to find hams and batteries. What’s the next book about? Is it an Elvis? Standalone?

RC: Another Joe Pike book. I want to write something else, but Pike won’t let me.

PCN: Have you publicly announced that anywhere else? Can I claim it as a world exclusive due to my intrepid scoop-breaking abilities?

RC: Probably, but you can tell everyone I’m announcing it here first. I won’t tell.

And that concludes my world exclusive scoopy interview. Deep, massive thanks to Robert for chatting and not telling. (To see and hear him read excerpts from TFR, click here.)

Now, for the giveaway…

Up for grabs is an ARC of The First Rule, which will come gift-wrapped from Lydia at Putnam, who has mad wrapping skills. The winner will be randomly selected.

A second name will be randomly chosen to receive a set of four picture cards, autographed by Robert. (See closeups below.) They feature locations from the Elvis Cole and Joe Pike books—including Elvis’s house!—with text from the novels in which they were mentioned. 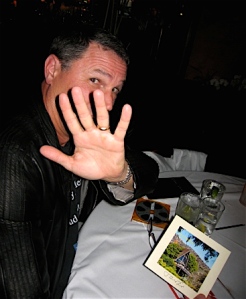 Robert Crais, happy to see me

These aren’t available anywhere else because I made them, then ambushed Robert at a restaurant and got him to sign. (If the pictures look familiar, some were used in the video “Elvis Cole’s Los Angeles,” which can be viewed here.) They can be used as postcards, bookmarks, coasters, refrigerator art, etc. I haven’t even offered them to my own mother but will give a set to one of you.

Temporary red arrow tattoos might also be included with the prizes if I can resist putting them all over myself first.

In The First Rule, Joe Pike goes to great lengths to defend the name and memory of his friend, Frank. To enter, answer the following question:

You must also be a:

New subscribers/followers get 1 entry, current ones get 2, people who tweet about this giveaway (and let me know) get 3 entries. Giveaway ends Dec. 14, 5 p.m. PST.

Winners will be announced only here and via Twitter; no e-mail notifications will be done. If winners don’t respond within 48 hours, alternate names will be chosen. 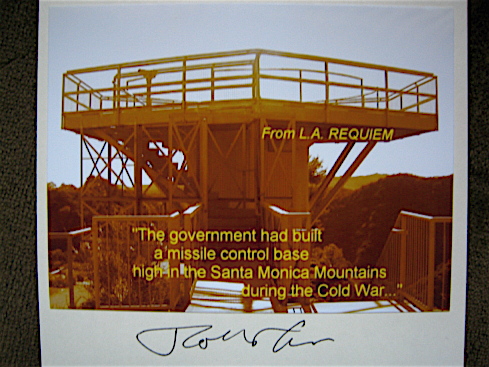 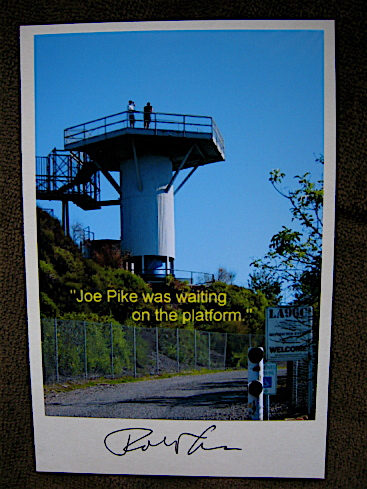