With all the holiday activities going on, I’m woefully behind on everything (haven’t seen Avatar—what?!) so the following reviews will be a little abbreviated. They’ll take less time for you to read so you can fulfill your obligations, too.

The movie is a very mature, if flawed, exploration of the emotional complexities of divorce, not making anyone out to be the bad guy or completely blameless. Streep is as radiant as ever (she doesn’t age!), Baldwin has some very funny scenes, including an unfortunate Skype incident, and Martin turns in a lovely, understated performance as someone who might be falling in love but is reluctant to move forward with the bitter taste of his own divorce still fresh in his mouth.

The most refreshing element for me was seeing how the family, though damaged by divorce, is so functional. They talk things out, they’re respectful towards each other and the kids don’t seem to prefer one parent over the other. Conflicts exist and obstacles abound; the affected parties just don’t turn their affairs into a Jerry Springer episode. I’m not sure what it says about the state of our times when I was surprised, but pleasantly so, to see family members not bitching each other out on screen. Nerd verdict: Complicated but fun.

After Marine captain Sam Cahill (Tobey Maguire) goes missing and is believed dead in Afghanistan, his brother Tommy (Jake Gyllenhaal) helps his wife Grace (Natalie Portman) and daughters Isabelle and Maggie (Bailee Madison, Taylor Geare, respectively) through the grieving process. Uncle Tommy gets a little too close and of course, this is exactly when Sam comes home. [Note: This isn’t a spoiler. We see him alive in Afghanistan even while the family mourns.]

Maguire does impressive work as the conflicted soldier who comes back haunted by things he was forced to do to survive, actions for which he can’t forgive himself. He’s a shadow of his former self, unrecognized by loved ones, feared by his children. He’s intense in a quiet way, which is much scarier than an over-the-top way. 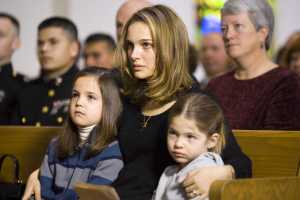 Portman is more sensual and womanly than usual as a young wife and mother trying to navigate uncharted waters. Gyllenhaal is believable as Maguire’s brother but I didn’t buy for one minute that he’s some tough ex-con who just got out of the Big House. The real stars for me, though, are the two actresses who play Sam and Grace’s little girls. They have a natural, easy style that made me think they were simply being, not acting. It’s an easy concept to grasp, not necessarily to execute on camera. Drawing out amazing performances from young actresses (see: In America) is a specialty of director Jim Sheridan, who makes his movies intensely personal.

I also like his way of covering heavy subject matter with a light hand. He often cuts away from a scene before its natural end because he trusts we can fill in the rest. When two military reps arrive at Sam’s house to notify Grace of his so-called demise, we see Grace approaching the open door, the horrible realization washing over her face, and the scene ends without the actual notification. Sheridan doesn’t jerk tears; this isn’t a war movie. It’s about people trying to find a way to live again after a part of them dies. Nerd verdict: Relatable Brothers.

I’m going to keep this one brief because I fell asleep three times while watching it. The performances can’t be faulted, except for maybe Paul Giamatti’s scenery chomping as a devout Tolstoyan who wants Leo Tolstoy (Christopher Plummer) to will his estate to the movement, much to the chagrin of the author’s wife. The movie is one long melodramatic tug of war between Giamatti’s Vladimir and Helen Mirren’s Sofya and none of it was compelling. It’s more a history lesson than entertainment and even James McAvoy’s presence as Tolstoy’s secretary couldn’t save this for me. Nerd verdict: Bypass this Station

Movie Review: THIS IS 40

A Tale from My Christmas Past