Darn that Crystal Bowersox! Why did she have to get sick and subject us to an early round of the guys? That’s a full five-point coolness deduction for keeping us from an aesthetically enjoyable Tuesday edition of American Idol. Let’s echo Ryan and hope she gets better in time to compete.

Fun fact: Idol has a history of contestants falling ill (Megan Joy, Carly Smithson and others), but this is the first time a whole episode of the show was changed as a result. It’ll be interesting to note how her votes will be affected by this development. And by “interesting” I of course mean “not interesting” because her votes will obviously go up (like she needed the help). Nothing helps a fan favorite like a brush with death. Just ask David Cook and his Top 24 heart palpitations.

Despite the scheduling frustrations, the guys proved to be a worthy substitute. To take a dunder-headed, neon-watch-wearing page from Randy Jackson, the guys were a million trillion thousand percent better than last week. Everyone shook off the first week jitters and actually came to play.  Now we can properly sort out who should be here, who’s actually talented, independent of the biased pictures the producers painted for us during auditions and Hollywood Week (this might not be good news for Andrew Garcia).

Here are the reviews of each performer, in order of best to worst. 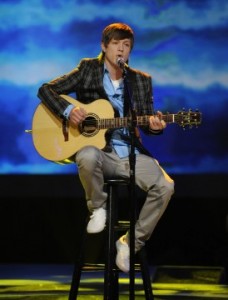 A lead-in package about how nervous and inexperienced you are? Solid choice, A-Lambs! It’s always a good way to make us believe you could be the next American Idol by revealing your pre-game vomit session. Who are you trying to be, Doug Dorsey? (I wonder who the Kate Moseley would be in this Cutting Edge scenario? Ah, who am I kidding? It’s totally Siobhan Magnus!) Thankfully, it looks like he’s getting over his insecurities. Alex gave a great performance—nice tone, good control, great song choice, rocked an awesome blazer. If he keeps improving, he might be a dark horse in the competition.

Lee Dewyze – “Lips of an Angel”

Close your eyes and he could be ANY bland white frontman in rock today. This is not necessarily a bad thing, all things considered. Americans loves them some bland white frontmen; just ask Chris Daughtry’s soundalike self. The problem here is that Lee is nothing to look at, and it has nothing to do with setting his shoulder back. There isn’t anything dynamic about him, nothing unique about his style; he’s just a voice, good though it may be. As the weeks go on and the rest of the group catches up to him vocally, he’s gonna be in trouble.

Tim Urban – “Come On Get Higher”

Isn’t he basically Alex Lambert with a different style of mullet? And less good? Since we already HAVE a Zac Efron, and Glee already has Cory Monteith, Ellen is crazy to suggest Tim should give up singing and act. (Though that probably didn’t stop The Disney Channel from slipping a contract under his hotel-room door two nanoseconds later. And Vanessa Hudgens from sitting up a bit straighter.) Tim made big strides from last week—good performance, great control, nice vocal. With Simon’s blessing, he’ll be safe this week.

Todrick Hall – “What’s Love Got to Do with It?”

Lemme get this right. In an attempt to stay in the competition, he’s choosing NOT to whip out his amazing dance moves, pretty much the sole reason he is still here? Uh, FAIL. He should ALWAYS be dancing, never NOT dancing. Also? Always wearing a futuristic blazer and changing up classic pop song arrangements. Randy is dead wrong (as always) to tell Todrick not to make the songs his own. More than anything else, Idol is about artistry, showing us the recording star you will be after you leave the show. So why would they tell Todrick to be boring and bland? He’s doing the exact thing he’s expected to do and doing it well!

Aside from sticking his lips out WAAAAAY too much for my widescreen HD TV’s liking, Michael made it work. He’s got great control of the stage, and he picked a very smart arrangement; going R&B is the right method for shoring up his voting constituency. The singing itself may not be so great, but at least he’s keeping us entertained.

Picking an overdone song made famous by more popular former Idol contestants? SMRT! Even smarter when he lacks Bo Bice’s passion and intensity and Elliot Yamin’s charisma. There is NOTHING special or vital or urgent about him. He’s all hair, eyes and stubble. The vocals aren’t there, his phrasing is amateur hour and he has no understanding of how to show more than one emotion at any given time. Also? Don’t profess to never having watched Idol before and expect us to think that’s some sort of virtue. American Idol has been the number one show on television for the last seven years; the times of claiming ignorance to this phenomenon are O-V-E-R.

Andrew Garcia – “You Give Me Something”

This performance is why you can’t really start judging the contestants until now. For all his Paula Abdul “Straight Up” awesomeness, we now find that Andrew isn’t actually that good. He has a small, pitchy voice, no personal style, and brings exactly zero electricity to the stage. Andrew can arrange, but that’s about all he can do. He will easily make the Top 12, but he’s not a threat to anyone at this point.

He may have studied his performance last week and thought he made positive changes, but from this side of the thing, it wasn’t much better. He rushed the whole song, white-knuckled the mic (and with a weird three-finger grip technique), lost control of his vocal, threw around his hands like he had no idea what to do with them (he probably didn’t) and picked the wrong song. If he’s gonna court the Justin Bieber vote, maybe he should consider playing to the Justin Bieber fanbase instead of choosing 40-year-old Motown standards.

Has there been an Idol wannabe more in need of a serious attitude adjustment? Interrupting the judges, with that unearned shit-eating grin on his face? He may be stylish, but he is SO hateable. Thankfully, with his pale Marvin Gaye imitation, he probably sealed his own fate. Also worth noting: During his performance, I caught Didi in the audience looking utterly bored out of her mind. Let me tell you something—you do not bore Didi Benami on America’s watch! She is too special! Jermaine is going home.

John was so boring that when Simon gave his usual biting criticism, the audience couldn’t even manage a passionate “boo” (and that’s what they are specifically brought in to do!). Just a complete and total nothing of a performance; John Park is dunzo.

Were you also disappointed the girls didn’t perform tonight?  Do you agree the guys were a wild improvement over last week? Sound off in the comments!

Backstage at the Grammys 2009