This past weekend was another fun and enlightening experience at the annual festival of books. This was the first year since its inception that the festival was held at USC instead of UCLA. It’s a smaller campus so I didn’t have to walk as far to go everywhere but the layout was a little confusing and I got lost a lot. I did manage to find a student lounge where I could rest between panels and enjoy the air conditioning and free McDonald’s iced coffee. I don’t know why I never sneaked into student lounges at UCLA.

I only attended on Saturday but it was a full day. Besides meeting bloggers Danielle from There’s a Book and Rachel from Scientist Gone Wordy for the first time, I got to hang out with my old pal, Paulette, an original gangsta Craisie; and the le0pard man himself, Michael from It Rains…You Get Wet, and his awesome family. True story: They gave me lemonade and chips. Jealous?

I started the day by going into “Organized Crime”—the panel, that is. (I got no skills for making fake Coach bags.) The panelists were T. Jefferson Parker, Attica Locke and Stuart Neville with moderator April Smith. The authors have all written novels in which organized crime plays a major role, and they told fascinating tales about their research process and how their lives are affected by the things they write about. The following are some highlights from the discussion.

Smith started by saying, “It’s a shadow market that cycles drugs, people, merchandise…a $2-trillion industry that’s transnational. Organizations that you all have probably heard of—the Yakuza, the Mafia, Mexican cartels, Eastern European groups.” Then she asked, “How do you make a book out of that?”

Parker, a three-time Edgar winner who writes about Mexican drug cartels in his Charlie Hood series, said, “We put faces on things.” He said drug-related deaths in the last five years number 40,000. “I just take one of those deaths and write about it.” And then he said imagine that one story multiplied 40,000 times.

Neville continued along these lines by saying, “Death can very well just be a number, a statistic.” He said in his writing, he tries to turn the number into a person—someone’s mother, father, friend, etc. 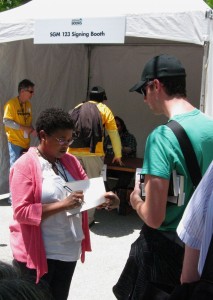 Attica Locke signing for a fan

Smith guided the authors towards a discussion of bureaucracy in our government and in crime cartels. Locke, whose Edgar-nominated Black Water Rising is about the Texas oil industry in 1981, said, “Bureaucracies are fighting shadows of themselves because there’s just as much organization in drug cartels as in any government building.”

Neville, who won an L.A. Times Book Prize last year for his The Ghosts of Belfast and lives in Ireland, said it’s been taboo there for the last ten years for Catholics to join the police force. Less than two weeks ago, a Catholic police officer was killed by a car bomb “by someone from his own background.” The protagonist in his latest novel, Collusion, is a Catholic policeman. “There are crimes that shouldn’t be investigated too closely. It might unearth something worse than the crime,” he says.

Locke added, “We all know there are things in our government that’s absolute bullshit…But if we dig it up, it’d turn everything upside down. It hurts too much to acknowledge they don’t give a shit” so we go along with it and look the other way.

Parker said that counterfeit goods is a huge criminal industry and guess who buys most of it? The U.S. “Organized crime leads to Gucci,” he says.

Smith asked the panelists, “How do you know all this stuff?” She then talks about her own research process for her June novel, White Shotgun, which is set in Siena, Italy. She’s been working with the FBI since her first novel, North of Montana (the protag is Special Agent Ana Grey) so she talked to them in Rome and the police in Siena.

Locke said she found the “oil stuff” really challenging because she didn’t know anything about it. She has a young daughter and couldn’t travel around for research so much of it was done at the library.

Neville told an anecdote about how he traveled to New York and took pictures of buildings for research. While writing Ghosts, he realized he really needed an alley behind a particular structure but the real building didn’t have one. When he tweeted about his dilemma, “someone said very helpfully, ‘Make it up.'”

Locke said her lead character, Jay Porter, is based on her father. He would tell her stories from his experiences as a criminal defense attorney but at one point she had to ask him to stop because she wanted it to be her story, not her dad’s. 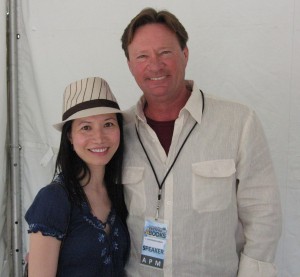 Parker pointed out “there are books that are fastidiously researched and deathly dull.” For his part, he takes research trips for the atmosphere, “for the feel.” He said you can see a picture of Veracruz’s City Hall on the Internet but when you go there, you see pigeons gathered out front and putting them in the description makes it more real.

Locke asked her fellow panelists, “Anybody afraid that what you put down on paper might get you in trouble?”

Smith said, “Yeah, animal rights with [her last novel] Judas Horse. I don’t know about the Mafia [for Shotgun]…”

Neville said simply, “I have concerns.” To me, these were the most unsettling three words spoken during the panel.

Parker lightened the mood by saying, “Even when I write about cartel guys doing horrible things, I write them with respect…I think the henchmen might actually like my books and not want to kill me because they’re proud of their exploits.”

Smith added, “Maybe when our publishers go out of business, we can work for the cartels!”

Smith then opened up the floor to questions from the audience. At this point, I stopped taking notes because my hand got crampy.

Check back later this week for my report from the other panel I attended—Robert Crais being interviewed by NPR’s Karen Grigsby Bates. 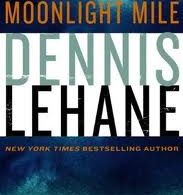 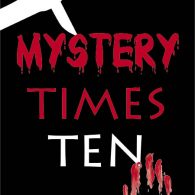 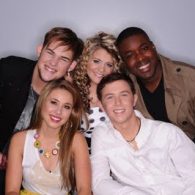