Justin Timberlake’s character, Dylan, has an impediment that prevents him from doing simple math, i.e. he thinks 6×3=92. But it doesn’t take someone with a math problem to see that Friends with Benefits, despite a few mildly amusing scenes, adds up to less than the sum of its parts.

The premise, a rehash of No Strings Attached with Natalie Portman and Ashton Kutcher, has Dylan and Jamie (Mila Kunis) deciding to have sex without emotional attachment (“like playing tennis”) after getting out of bad relationships. They also agree to be friends since head hunter Jamie just got Dylan a job at GQ that makes him a Los Angeles transplant in New York City.

I saw this movie with my friend Eric Edwards, a PCN contributor, and we thought we’d review this movie Siskel & Ebert-style so you get both the male and female points of view. Turns out, a bland movie is a bland movie, no matter how you look at it.

Pop Culture Nerd: Wow. I thought this would be much funnier. JT is always hilarious on Saturday Night Live, Kunis can do no wrong, and director Will Gluck did Easy A, which we both liked. So, what do you think happened?

Eric Edwards: We already saw this movie earlier this year and it was done better.

PCN: You can tell this one was written by men and No Strings was by a woman. First of all, in this one, Jamie was dumped by Andy Samberg. Excuse me?? Then she developed real feelings first in the relationship, while Natalie Portman’s character was the one who hung tough in the other one, which I liked. It wasn’t as much a cliché.

EE: There’s a movie within this movie that makes fun of all those clichéd rom-coms, so we think we’re watching an anti-rom-com, but then it ends up doing everything it was making fun of, right down to the soundtrack! It was very confusing.

PCN: Yeah, it started out wanting to be edgy, then lost its nerve and decided to be like all the rom-coms that came before it, including bad Katherine Heigl ones that Jamie was cursing at!

EE: The other problem was, I don’t think Timberlake is ready for leading man status.

PCN: He was playing it safe and wasn’t very funny. I wanted him to break loose and get all wacky the way he does on SNL.

EE: Which probably would have made him more charming, but he came across stiff and out of his league, especially since he was surrounded by such a great supporting cast.

PCN: He wasn’t up to Mila’s level when it came to comic timing and making it look effortless. Oddly enough, I thought he was more effective in his few dramatic scenes. And he had decent chemistry with Mila but they often seemed like just friends, exactly what their characters kept claiming they were.

EE: I loved everything about her.

PCN: Oh, she’s so gorgeous and funny, I just wanted to shove her down the stairs of that tall building where she likes to go up on the roof. And I love Patricia Clarkson. She’s welcome in any movie. Richard Jenkins did nice work as Dylan’s dad, but his storyline is unnecessarily dramatic and seemed like it belonged in another movie.

EE: Woody Harrelson’s comic timing was perfect but you almost wish he was younger so he could play Timberlake’s role.

PCN: Not that it’s Harrelson’s fault at all, but I didn’t understand why his character Tommy was even there. He didn’t serve any real purpose.

EE: He’s the male sidekick who provides comic relief, and JT probably would have been better doing that. 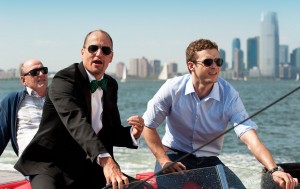 PCN: That would have been interesting but either way, Tommy needed better dialogue. It seems the writers just made him say “dick” a lot and felt that was enough.

EE: They let him make that speech to Dylan about what it’s like to find the love of your life, but it happened too early in the movie so they had to have Dylan’s dad say it again towards the end to hammer the point home. The writers didn’t trust us to get it the first time.

PCN: When Dylan’s dad was going on about how Dylan shouldn’t waste time once he’s found the one, I couldn’t help picturing JT morphing into Billy Crystal running down the street in NYC trying to get to Meg Ryan before midnight in When Harry Met Sally…

EE: Yeah, I agree. And I could have done without the ongoing joke about how you’re gay if you like Harry Potter, and the flash mob sequences, which went on too long.

PCN: I think the movie went on too long. I should have stayed home and mated my socks.

When Will TIME TRAVELER'S WIFE Travel to Movie Screens?

Agent Duped, but Not Victimized by Brüno

Harry Potter and the Unsung Hero