Are y’all watching GCB Sunday nights on ABC? Would it help if I told you it stands for Good Christian Bitches, which was the original title (based on Kim Gatlin’s novel of the same name) until somebody got scared it’d be offensive? Watered-down title aside, at least the powers-that-be have left the show’s content pretty spicy. 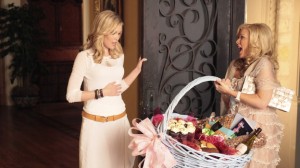 Last week’s pilot opened with a man grabbing a whole lotta cash and making a run to Mexico with his girlfriend in his fancy car. She decides to give him some, ah, oral stimulation on the way, which causes him to drive off a cliff, crashing and burning and killing both of them.

The man was Bill Vaughan (Greg Vaughan), a Ponzi schemer who just made his wife, Amanda (Leslie Bibb), a widow, and left his family with nothing. Amanda has to move from California back to Texas to live with her controlling mother, Gigi (Annie Potts), until she can get on her feet again. Problem is, Amanda was a mean girl in high school, and the local girls she used to terrorize, now supposedly righteous Christian women, can’t wait to help her reap what she sowed. It’s like the flip side of Revenge, only the cruel person has repented and we’re laughing at the vengeful people.

As expected, most of this is over the top, but if you accept it for what it is, it’s pretty entertaining. One of the show’s writers is Robert Harling, who wrote Steel Magnolias, Soapdish, and the adaption of The First Wives Club. The man knows about soapy plotlines and saucy women.

The cast is appealing all around, with each actress imbuing her character with a little more depth than first meets the eye. In the pilot, hotshot businesswoman Cricket (Miriam Shor) tries to prevent Amanda from getting a decent job. In the second episode, she has a moment at home with her husband that makes us look at her differently. Sharon (Jennifer Aspen) drowns her insecurities in food because she’s certain her husband Zach (Brad Beyer), who used to be in love with Amanda in high school, will leave her for the new widow. The MVP is Potts, whose signature drollness can’t disguise how much Gigi loves her daughter.

Bibb is okay as Amanda, but she’s not the most interesting character since she has to be the straight woman. Maybe there will be a flashback episode and we’ll get to see her cut loose as that awful person everyone keeps talking about.

Adventures in the Real World