A Few Thoughts on SHERLOCK: “The Reichenbach Fall” 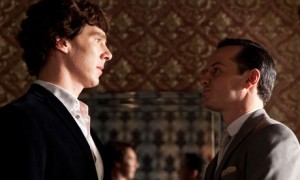 Cumberbatch with Andrew Scott as Moriarty

OK, just finished watching the season 2 finale of BBC’s SHERLOCK, and spent some time with Mr. PCN trying to figure out how Sherlock survived that fall. We came up with a reasonable theory, I think.

Holmes tossed a body over the side of the building, probably one that Molly helped him procure from the lab at the hospital because we saw him pay her a visit. Holmes also had assistance from the Baker Street Irregulars (he mentioned a street network earlier in the episode), one of whom, on the bike, knocked Watson down as he ran to Holmes. This gained the other Irregulars time to swarm around the body, blocking it from public view and removing it, while Holmes ran down to the street and took its place, smearing himself with fake blood. And this is what Watson saw when he finally made his way over.

I think Moriarty also used some kind of prop gun and/or blanks and squibs for his “suicide,” because the Moriarty from the canon was definitely not suicidal.

What did you think? I read that filming for season three won’t start until next year so we won’t get definitive answers anytime soon. Arggghh!