Book Review: STANDING IN ANOTHER MAN’S GRAVE by Ian Rankin

I finally jumped on the Inspector Rebus bandwagon after friends (I’m looking at you, Jenn aka The Picky Girl) have long pulled it alongside and tried to heave me on board. It wasn’t a matter of disinterest on my part but lack of time. Then the generous people at Little, Brown/Reagan Arthur sent me Ian Rankin’s latest novel featuring Rebus, Standing in Another Man’s Grave. I read the first page, then kept going, and finished the novel in two sittings.

Five years after he retired, Rebus is working as a civilian for the cold case squad. He meets Nina Hazlitt, who insists that her daughter’s disappearance in 1999 is connected to several other missing young women, including one who recently disappeared. Rebus is Nina’s sole sympathetic ear, and as he probes the matter, he finds she might be on to something.

But it’s hard to make progress when he’s up against a supervisor more interested in climbing the bureaucratic ladder than clearing cases, and the internal affairs investigator named Matthew Fox who’s hell-bent on nailing Rebus for his unconventional methods. Rebus also has to contend with a couple of mob bosses, all while attempting to not destroy the career of his partner, Siobhan Clarke.

Rebus is a winning protagonist, with a quick wit, sharp eye, and irreverence for anyone he deems a moron. Underneath Rebus’s defiance, though, are melancholy reflections on mortality (the title is something he mishears in a song’s lyrics). He’s aware of his limitations, but still determined to operate on his terms.

It’s interesting how Fox, who headlined Rankin’s The Complainants and The Impossible Dead, is supposedly the bad guy here, but the chapters told from his point of view manage to make us almost sympathetic to Fox’s cause. Rebus can be a loose cannon, and Rankin does a nice job of showing how these two flawed men are possibly more alike than they realize.

The one issue I have is with the ending. **Spoiler**

Rankin doesn’t explain the murderer’s motives, having Rebus and Clarke simply write off the person as a psychopath. This is too easy. While in real life we often don’t get insight into a killer’s mind, in fiction it’s possible to answer the whys, if only to create a sense of logic in a chaotic world, which is one of the reasons I think crime fiction is so attractive for some readers.

The killer’s actions don’t need to be explained by Rebus and Clarke—they’re not psychologists—or even by the killer. What I found lacking was how the cops don’t even seem concerned about the reasons as long as the perp is in custody. The “psychopath” label is supposed to explain everything, but if we just accept that without any desire for a deeper understanding of the roots of violence, it feels like we’re already standing in humanity’s grave.

That quibble aside, I would follow Rebus and his trusty old car on future adventures, and even look into his old cases to see how he got here.

Robert Crais and His Mighty Balls 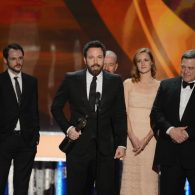