Tonight covered Motown hits and I never thought I’d write this but Adam Lambert turned in the best performance. Shocked? Me, too. When he appeared all cleaned up, with his hair slicked back off his face and wearing a shiny Dino suit, I almost didn’t recognize him. Then he unplugged himself by singing Smokey Robinson and the Miracles’ “Tracks of My Tears” with such ache and restraint, I had to rewind the DVR to hear it again. I’ve been trashing this guy for always screaming his songs but this soft, heartfelt performance knocked my socks off. Well done. Now please don’t go back to screaming, cheesy camera-seducing moves and tight leather pants.

Matt Giraud started the evening with a really good rendition of Marvin Gaye’s “Let’s Get It On,” which was the perfect choice. The guy was completely in the zone and he gave it that bluesy feel we’ve come to expect from him. Can you imagine what it must’ve felt like to sing for Smokey and have him say, “Marvin woulda dug that”? I would’ve peed my pants. And I was glad Matt didn’t stay behind the piano for the whole song, giving us instead just a little bit of sexy swagger.

Kris Allen was second with “How Sweet It Is (To Be Loved by You).” His vocals are getting stronger each week but as Simon says, “To be a star, you have to be conceited. Like me.” I don’t want nice little Kris to turn into a snob but he doesn’t exude that much star presence on stage.

Scott MacIntyre sang “You Can’t Hurry Love,” once again accompanying himself but changing things up a bit by having the backup singers gather by his piano. This song is more uptempo than his usual boring choices but it still wasn’t good enough for me.

Then came Megan Joy. You know I love this girl and have been championing her since the beginning but nothing worked for her this week. First of all, she looked like a tacky Hawaiian tourist the Love Boat left behind in her flowered outfit. Then she chose “For Once in My Life,” which was too fast for her and also sometimes too low and other times too high. When Kara mentioned “My Guy,” I thought, Yeah, that would’ve been perfect for Megan. But, like Smokey said, she’s jazzy and cabaret and unique so I still hope she stays.

Anoop slowed things down with the Miracles’ “Ooh Baby Baby” and was smoof and soulful. He also visited Lambertland and unleashed a falsetto I didn’t know he had. I thought I liked my Anoop funky but two weeks in a row now he’s shown he’s quite powerful as a balladeer.

Michael Sarver covered “Ain’t Too Proud to Beg,” which I’m afraid he might have to do with the judges to save him tomorrow night. This guy didn’t have one ounce of soul in him and he still had the slightly country twang in his voice which was all wrong for the song. He kept saying how much fun he had on stage but don’t we have to enjoy watching him, too?

Lil Rounds sang “Heat Wave,” looking all cute and retro, but she shouted through the whole song. It’s as if Loud is her default setting. She was also shaky on a whole bunch of notes and dropped a couple notches on the frontrunner meter.

And then Adam sat on a stool and crooned that lovely rendition of “Tracks of My Tears” with just a guitarist, a bass player and a dude softly thumping on a wooden crate for accompaniment. My jaw fell on the floor and my eyes were opened wide. Every year, a performer has a defining moment that slaps you across the face and gets your attention—David Archuleta with “Imagine” last year, Kelly Clarkson with “Natural Woman” in season one—and this was definitely Lambert’s moment.

After that, Danny Gokey came on, dancing and singing “Get Ready.” His raspy voice is perfect for this type of music and he’s sure expending a lot of energy but after Lambert’s performance, I can only call it okay.

Allison Iraheta closes the show with “Papa Was a Rolling Stone” and man, she owned that stage and everybody else was just paying her rent! That girl’s power blows me away. I hope y’all voted for her because if she ends up in the bottom three again, she might come to our houses and kick all our asses.

I missed Alexis Grace tonight—she would’ve killed with Motown hits. But since I couldn’t vote for her, I went with Anoop, Adam and Allison (hey, an alliteration!).

What’d you think? Did you like Adam’s makeover or do you like him better with guyliner and sideswept bangs? Who should go home tomorrow? Discuss! 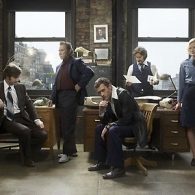 WHERE THE WILD THINGS ARE Trailer is Here!