I’m trying not to drool as I write this. Variety reports that Javier Bardem has been cast in the movie version of Elizabeth Gilbert’s monster bestselling memoir Eat, Pray, Love as “Felipe” (his real name is Jose), the irresistible man she meets in Bali. Julia Roberts had already been cast as Gilbert, with Richard Jenkins playing her friend Richard from Texas (who answered a few questions for me about that here).

Though Bardem is not old enough—he’s younger than Roberts when Felipe is significantly older than Gilbert—he would be a compelling reason for Gilbert to break her self-imposed celibacy. Viewers would nod their heads and say, “It’s okay, you tried but we understand.”

Any other EPL fans out there? What do you think of this casting? (UPDATE: Click here for my review of Gilbert’s follow-up, Committed.)

Book Review: RAGE AGAINST THE DYING by Becky Masterman 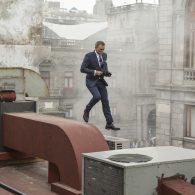