Having seen the gorgeous trailer, I attended a screening of this movie expecting to be uplifted and inspired and all those other positive adjectives. Alas, it didn’t quite happen. Though this is not a bad movie by any means, it lacks some of the passion I imagine Amelia Earthart had for flying.

If you’re looking for insight into how she got that passion, you won’t find it here. We’re simply told that Earhart wants to fly so she can be free. From her alcoholic father? A miserable childhood? I don’t know because the film doesn’t address that part of her life, and I haven’t read the books—Susan Butler’s East to the Dawn and Mary S. Lovell’s The Sounds of Wings—on which Amelia is based. But fly Earhart does, in many spectacularly shot sequences that almost made me run out and sign up for flying lessons, forgetting for a moment I have acute acrophobia. 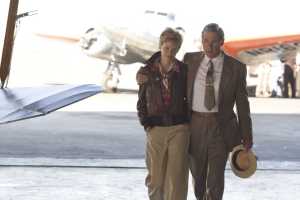 The movie does cover her rise to celebrity status and romances with both G.P. Putnam (Richard Gere) and Gene Vidal (Ewan McGregor), though they’re depicted quite chastely (the Vidal affair was extramarital), as if to say Earhart’s true love was in the skies, not with any man.

Hilary Swank turns in a respectable performance but she’s hampered by Earhart’s mannerisms and cadences. I’m a huge fan of the actress’s spunky, forthright acting style when she’s playing scrappy characters. Here, portraying an iconic real person from the 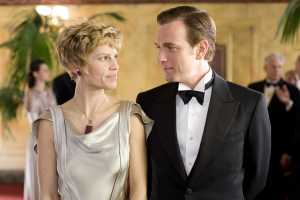 1930s, she’s forced to stay within certain boundaries and therefore doesn’t get to unleash her usual fire. McGregor, on the other hand, is sexier and more handsome than I’ve ever seen him (though his screen time is limited), while Gere does his usual squinty-eyed thing. Christopher Eccleston offers prickly but stouthearted support as Earhart’s navigator, Fred Noonan.

The thing I recommend most about this movie is its cinematography by Stuart Dryburgh. The scenes with Swank soaring through clouds, over luscious green hills and blue oceans, put viewers right in the cockpit and clearly illustrate why Earhart loved to fly. There’s a sense of wonder and elation about those moments I wish the rest of Amelia has. The sequence showing her final flight contains some suspense, but the movie about a woman who took risks and broke barriers mostly plays it safe and ends up breaking no new ground at all.

Nerd verdict: Amelia doesn’t soar as high as it could have

All photos by Ken Woroner/Fox Searchlight

Movie Discussion: THE ADVENTURES OF TINTIN

WHERE THE WILD THINGS ARE from Kids' Point of View