After seeing Precious: Based on the Novel Push by Sapphire (limited opening, Nov. 6), I think the Academy should just hand over the Best Supporting Actress Oscar to Mo’Nique right now because that race is sewn up. Hers is one of the bravest, most blistering performances I’ve seen in years; it’s breathtaking in its monstrosity.

Precious (Gabourey “Gabby” Sidibe) is an undereducated teen living in Harlem with her abusive mother, Mary (Mo’Nique), who’s on welfare. Precious is also pregnant with her second child by her father (yes, you read that right). Kicked out of school, she gets sent to an alternative school, where a sympathetic teacher (Paula Patton) inspires her to read and write and reclaim her life.

You may be thinking you’ve seen this story before—youngster who has been written off by the system meets a tough-but-compassionate mentor who turns his/her life around—and you’d be right. But director Lee Daniels, working from a script by Geoffrey Fletcher, takes it to a whole ‘nother level of rawness and Mo’Nique, known primarily as a comedian, goes there with him. 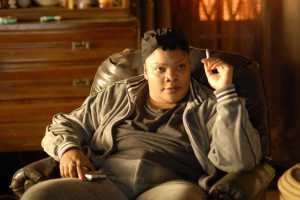 The award season is just getting revved up in Hollywood and there are many more contenders I need to see, but I don’t know how anyone can top Mo’Nique’s portrayal of the mother who’s jealous of her own daughter for stealing her man. When she was on screen, I just sat there gaping, wondering where she pulled all that evil from. Mary is like all the scariest mother figures you’ve ever seen on screen rolled into one, with the level of cruelty taken to the 24th degree then multiplied by a thousand. Mo’Nique’s performance, however, is second to none and if Oscar voters don’t give her a statue, somebody’s throwing the competition.

Sidibe is no slouch, either. In her feature debut, she plays a child whose eyes are much older than her years, who’s uneducated but not stupid, who’s been beaten by life but refuses to stay down. When I saw her in person after the movie (see notes below), the vast difference between the actress and the character makes the performance even more impressive. 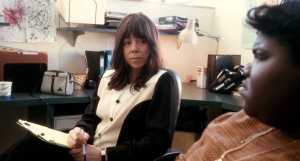 The supporting cast is also noteworthy—an unrecognizable Lenny Kravitz as a kind male nurse, Paula Patton (without noticeable makeup, she’s more beautiful here than I’ve ever seen her) as the teacher who goes beyond the call of duty to give Precious a chance at a better future, Xosha Roquemore as a classmate who provides much-needed levity, and the de-glammed Mariah Carey, who’s surprisingly good, playing her scenes as a social worker in a no-nonsense manner that doesn’t quite disguise the judgment in her eyes.

Daniels, Sidibe, Patton, Fletcher and producer Sarah Siegel-Magness did Q & A after the Variety screening I attended. Interesting tidbits gleaned:

Nerd verdict: Precious is a gem in the rough