Highlights and Lowlights of Golden Globes 2011 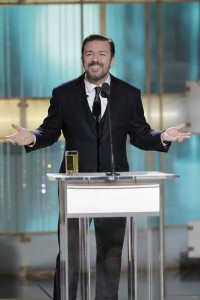 Gervais having a laugh

I look forward to the Globes every year because they are decidedly nutty—weird nominations, random presenters (Alicia Keys?) and drunk acceptance speeches. This year was no exception, starting with Helena Bonham Carter’s wacky dress and mismatched shoes on the red carpet (more on that in the fashion recap here).

That’s not to say the show didn’t have its dull, awkward moments. There were no surprises in the movie categories, with Colin Firth, Natalie Portman, Melissa Leo, Christian Bale, David Fincher, Aaron Sorkin and The Social Network winning Globes as predicted and pretty much guaranteed Oscars. Also, host Ricky Gervais’s material was surprisingly more low-brow than sharp.

For a complete list of winners, click here. Read on for my reactions to some of the other stuff that went down.

Biggest gasp in the room: When Gervais said in his opening remarks regarding I Love You, Phillip Morris, which stars Jim Carrey and Ewan McGregor, “Two heterosexual actors pretending to be gay. So, the complete opposite of some famous Scientologists, then.” It’s not a new joke but perhaps the A-list audience had never had someone say it to their face.

Grossest Visuals: When Gervais advised Hugh Hefner’s 24-year-old fiancé to not “look at it when you touch it,” referring to Hefner’s, ah, plaything. He then mimed what she would have to do in the bedroom. I also didn’t need the bit about Gervais having to help the Hollywood Foreign Press’s president, Philip Berk, get off the toilet and pop in his teeth. I’m all for irreverent but it has to be funny, not just disgusting. 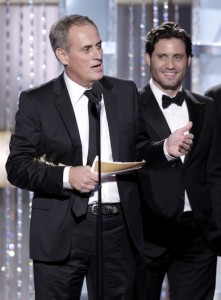 That's Ramirez in the back

Biggest who’s-that-guy?! moment: When Carlos won for best TV miniseries and star Édgar Ramírez went up on stage, I paused with a handful of Raisinets halfway to my mouth and said, “Hellooo there, más Ramírez, por favor.” The actor didn’t speak because producer Daniel Leconte accepted the award but Ramírez sure got me interested in checking out Carlos. Heh.

Most adorable acceptance speech opening: Chris Colfer saying, “I think I just dropped my heart between Natalie Portman and Julianne Moore so if anyone sees it, please give it back to me.” I think fans dropped their hearts right at his feet when he said that. Most defiant acceptance speech closing: Addressing all the kids who are bullied or told “no” or aren’t allowed to be who they are or have what they want because of it, Colfer says, “Screw that, kids” while brandishing his brand-new shiny Globe.

Seat filler with most screen time: Whoever was sitting in Julia Stiles’s seat. When the actress’s name was called as a nominee for best TV supporting actress in Dexter, the camera showed a much older woman who was obviously not Julia Stiles. I kept thinking director Louis J. Horovitz would figure out the mistake and cut away but no, the shot stayed on this mysterious woman, who seemed to really enjoy her close-up.

Funniest self-assessment: Jane Lynch saying “I am nothing if not falsely humble” upon winning best supporting TV actress. Now that I think about it, she may have just described everyone in the room.

Cutest TMI: Natalie Portman referring to fiancé Benjamin Millepied’s performance in Black Swan as a fellow dancer who said he had no desire to sleep with her character: “He’s the best actor. It’s not true. He TOTALLY wants to sleep with me!” This isn’t news since she’s pregnant with his child, but Portman always seems so reserved that the uninhibited moment was unexpected.

Most under-the-radar A-list winner: Mark Wahlberg, for being a producer of Boardwalk Empire, which won best TV drama series. Did you know he produced that? I didn’t, but then again, I don’t watch that show.

Best shout-out to people who truly deserve thanks: When Glee won best comedy TV series, one of the writers, Ian Brennan, said: “Thank you to public school teachers. You don’t get paid like it but you’re doing the most important work in America.” How about passing around a hat among the cast and creative team to start a collection for public schools, then?

Most likely to have skipped rehearsal: Andrew Garfield, who repeatedly stumbled while reading the intro for The Social Network. Maybe he should switch to Twitter since tweets are much shorter. 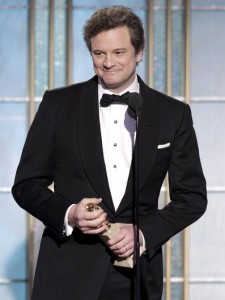 Firth, with his Harley substitute

Most timely win: Colin Firth’s. Referring to a possible mid-life crisis since he just turned 50, the actor said: “Right now, this [award] is all that stands between me and a Harley-Davidson.” I also liked how he called Speech director Tom Hooper and co-star Geoffrey Rush “my two other sides of a surprisingly robust triangle of man love.” Is it wrong to say I want to be part of any geometric shape that includes Firth giving away man love?

Best joke about an illness: After Michael Douglas got the audience on its feet when he made a surprise appearance to announce best motion picture drama, he quipped: “There’s got to be an easier way to get a standing ovation.” It’s good to see him survive his cancer treatment with his sense of humor intact.

Saddest coincidence: Laura Linney won for best TV comedy actress for The Big C, about a woman who has cancer. But she didn’t attend because her father, playwright Romulus Linney, died Saturday of…cancer.

Worst joke about a dead person: David Fincher calling himself JonBenét Rudin, which was just stupid. I guess he was saying producer Scott Rudin has been parading him around to the different award shows and he felt like a beauty pageant puppet but then Rudin would have to be Patsy Ramsey and she’s dead, too.

Dullest acceptance speech: Diane Warren’s, after she won for best original song. You know what’s more boring than reading a bunch of names from a sheet of paper? When you can’t even read your own handwriting and have to stop to figure out what it says.

What were some of your favorite moments? Were the winners deserving? Did you hear that Ryan Murphy confirmed backstage that Anne Hathaway is coming to Glee? 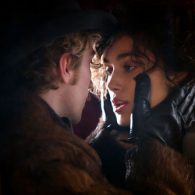 The Girl Who Will Play Lisbeth Salander Is… My Pop Culture Consumption This Week